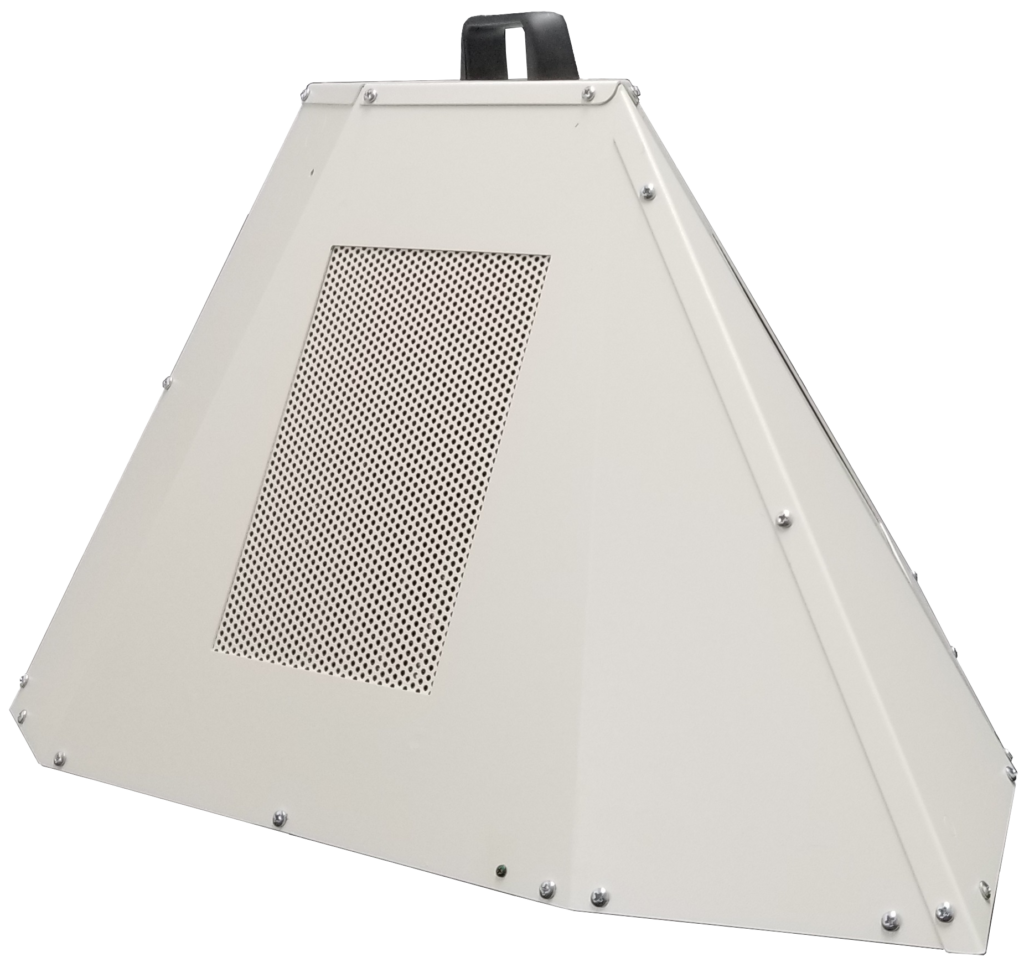 Everyone is Susceptible to Bed Bugs?

While some pests might be drawn to dirty rooms or left out food, bed bugs don’t discriminate based on the cleanliness or sophistication of the place. This means that any hotel, motel, or bed and breakfast is susceptible to a bed bug outbreak. What it comes down to is having a fast, safe, and effective way to treat the problem the moment you notice your uninvited guests.

What are Bed Bugs? 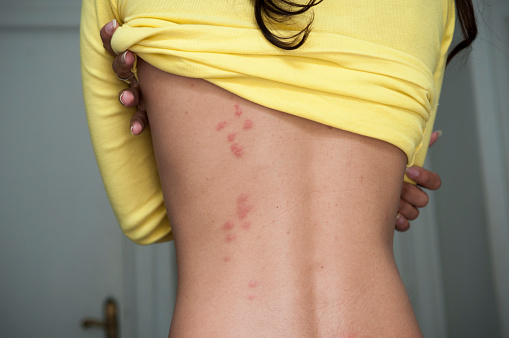 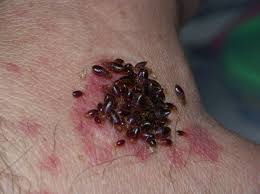 Bed bugs are small, nocturnal insects that feed on blood. Despite their name, bed bugs can be found in a variety of environments outside of bedding such as furniture, walls, office buildings, college dormitories etc. Recently bed bugs have undergone a massive resurgence and are quickly becoming a worldwide problem.

Adults are small, brownish insects, just under a ¼” (5mm) long and are relatively flat. They are nearly as wide as they are long, and oval in shape. Immature bed bugs (nymphs) resemble the adults, but are much smaller and lighter in color. Newly hatched nymphs are translucent and are no bigger than a pinhead (1mm). 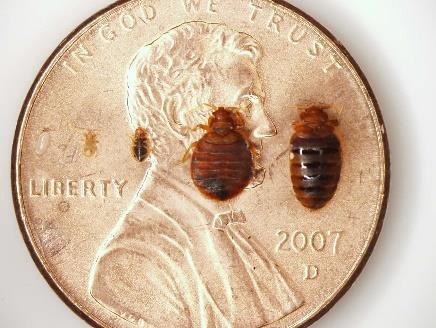 How Do I Identify Bed Bugs?

Most frequently asked questions and answers

How do you get bed bugs?

Bed bugs need to be introduced into an environment. They do not jump or fly but are excellent hitch-hikers and can be transported on clothing, luggage, used furniture and various other objects. Risk for bed bug exposure increases in several of the following situations:

How will I know if I have bed bugs?

The most reliable way to confirm you have bed bugs is to contact an entomologist or pest management professional and have them identify a sample collected from your home. However, there are key warning signs that you may have an infestation:

No. Although bed bugs carry over 28 human pathogens, there has been no documented case of bed bugs transmitting disease.

What are bed bug bit symptoms?

The medical concerns of bed bugs are typically limited to the itching and inflammation associated with their bite. The bite effects are similar to allergic reactions and can vary from itchy welts to a severe and painful rash that requires medical attention. Often, the emotional trauma associated with discovering a bed bug infestation is considerable.

How can I prevent an infestation?

There are several steps that can be taken to minimize the risk of infestation:

If I think I have an infestation, what should and shouldn't I do?

Upon discovering an infestation, contact a licensed pest management professional to evaluate your problem. You may want to AVOID discarding bedding and mattresses as this can spread the infestation throughout the house. Also, AVOID attempting to resolve the issue yourself as improper treatment could spread the problem throughout and increase costs to eliminate the problem.

Why have bed bugs come back?

Bed bugs were a common problem during WWII. The use of DDT insecticides nearly eradicated the insect from North America and they have not been a significant problem for nearly 50 years. Although changes in pest management practices and increased international travel may be blamed for the resurgence of bed bugs, the lack of public awareness may be the primary reason these bugs continue to spread at their current rate.

What is the history and resurgence of the bed bug?

No one knows what caused the resurgence of bed bugs in the US. Contributing factors may include:

Bed bugs were a common problem in the United States up through the World War II era. Around this time, they were virtually eradicated from the US with the wide scale usage of pesticides, such as DDT and Marathon. During the late 1990’s, bed bugs began to re-emerge as a pest in the United States, Canada, Australia, the UK, along with a number of other countries. Their secretive behavior, coupled with a lack of public awareness, has enabled this insect to move very efficiently from one dwelling to another and has facilitated their rapid dispersal throughout the country.

While no one can say what caused the resurgence of bed bugs in the United States, there are a number of factors that have probably influenced the re-emergence of this difficult pest. There has been a general increase in bed bug activity on a worldwide basis over the past decade. Due to the increased prevalence of bed bugs worldwide, the frequency of encounters with bed bugs during travel is also likely to have increased resulting in a greater number of introductions into the US than in the past. Most of the early introductions appear to have been associated with travel as many of the early infestations in the late 1990’s was identified in hotel guest rooms.

It is also likely that changes in pest management practices coupled with the development of resistance to modern day pesticides has contributed to the successful re-establishment of bed bug populations in the United States. In the past, hotel guest rooms were typically treated on a regular basis with residual pesticides. As a result, bed bugs introduced during travel were likely to contact pesticide as they left the luggage and traveled to the bed. During the mid-1990’s, there was a dramatic shift in pest management practices. Routinely scheduled treatments of baseboards in hotels, motels, and apartments were replaced with targeted applications of baits for pests such as ants and cockroaches. With the absence of the residual pesticide applications, bed bugs are able to travel freely and safely from the luggage to the bed, and successfully begin an infestation. It is likely that these factors have played a role in the bed bug’s ability to become re-established in the United States.

A continuous cycle of non-stop feeding.

Bed bugs eat from the beginning of life until they die. All stages of life they bite and they will not stop until they are killed or die. 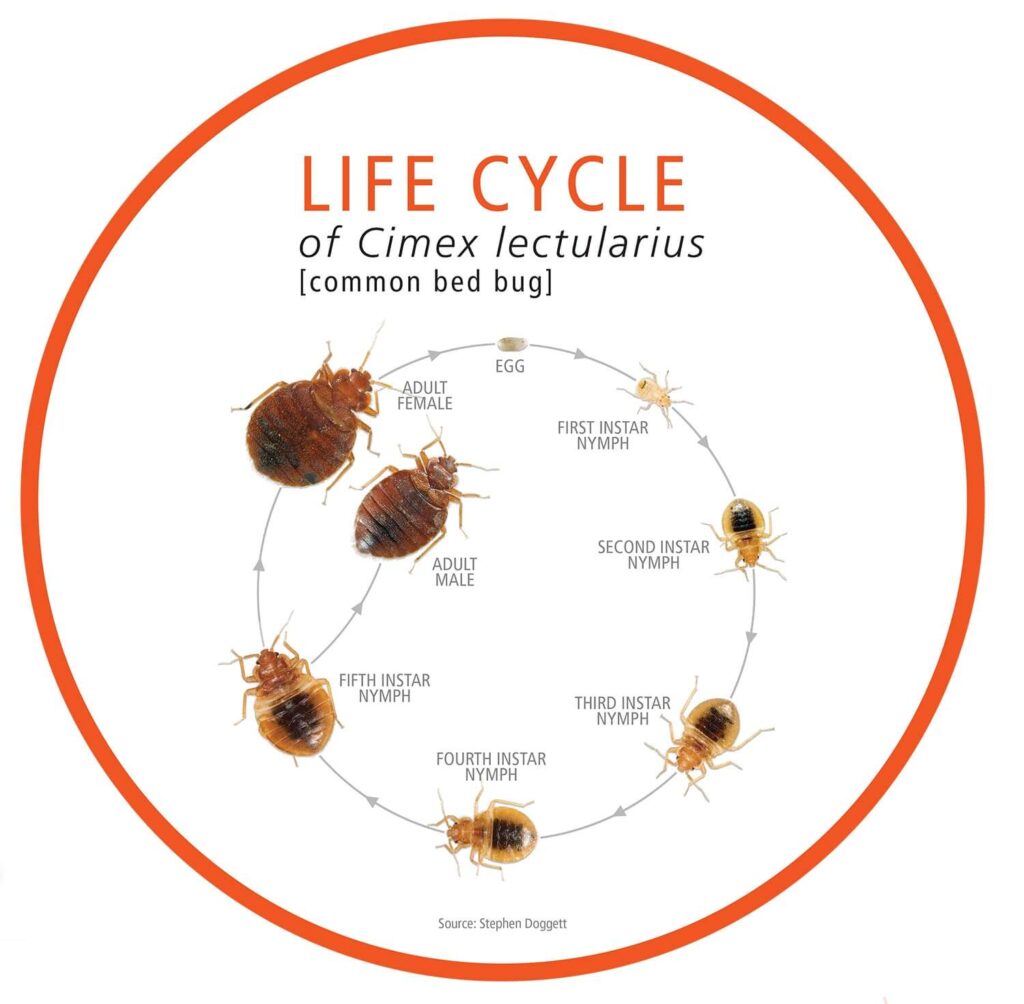 Bed bugs are the ultimate hitch-hiker, and with today’s ability to travel the world they are not going away.

Included in every package you buy. Also available without buying a package.

Why Chemicals Do Not Work!

Using chemicals has become the norm for pest control companies and other businesses. But chemicals leave behind a residue that can be hazardous when someone is exposed to too much or for too long.

In fact, in 2012 the CDC — the Center for Disease Control and Prevention — issued a warning about the dangers of bed bug pesticides and the dangers that can come from using too much pesticide or exposure to these chemicals.

Chemical treatments require, on average, 2.6 visits to completely eliminate a bed bug infestation. On top of that, industry data, scientific research, entomologists, and pest control experts have confirmed that the use of chemicals and insecticides for bed bug eradication is becoming less and less effective. That’s because bed bugs and other pests have evolved, making themselves resistant to certain chemicals by growing thicker exoskeletons or walking on their hind legs to better avoid over topical powders.

But, in many cases, using a heat treatment for bed bug eradication is effective in just one use with a median of 1.3 visits across the industry.

For years certain chemicals were successful and later discontinued or banned. Another generation of chemicals and compounds has replaced them and been used for several decades. Now entomologists are finding that bed bugs are becoming resistant to many of the commonly used chemicals. The typical suggestion is to increase the toxicity and amount of the chemicals being applied.

The genesis of most pest control companies is the chemical industry. The use of chemicals and the licensing of them for eradication has been the accepted standard process against a myriad of pests. However, that is not the case with bed bugs, according to current scientific research and field applications of chemicals

Did you know that bed bugs and other pests are building up a resistance to different extermination chemicals? This means that the chemicals need to be stronger or continually reformulated in order to keep pest problems under control. Industry data, scientific research, entomologists and pest control experts have confirmed that the use of chemicals and insecticides for bed bug eradication is becoming less and less effective.

Some bed bugs can walk on their hind legs

Bed bugs are now resistant to many of the current chemicals being used, and some strains have even grown a thicker exoskeleton that prohibits chemical effectiveness. Some strains can even walk on their hind legs over topical powders so they have no effect in contacting the body.

Bed bug experts are finally realizing that the most effective and chemical-free way to get rid of any pest or bed bug problem is through temperatures they are unable to withstand.

Lethal temperatures for bed bugs range between 117° and 121° Fahrenheit.

All Tri-Flo heaters get up to 121°F (49.4°C) to ensure all bed bugs and pests are effectively killed. Tri-Flo industrial electric heater that will hold a temperature of 121°F for an extended period of time, you’ve found a chemical-free solution for ridding your property of bed bugs or other pests.

Why Colorado Tri-Flo is the Best Bed Bug Heater

At Colorado Tri-Flo, our industrial electric heaters work to provide you with a safe, easy, and do-it-yourself option when it comes to bed bug infestations. Other bed bug extermination services rely on chemicals and other types of gas systems to get rid of any bed bug infestation. But at Tri-Flo, we know that those processes are not as safe and cannot guarantee complete removal of all pests. That’s why we’ve moved to heat. We’ve found that bed bugs can’t last beyond temperatures that are between 117º and 122ºF. This is what inspired us to create a heater that heats to 121ºF, working to ensure that no bed bugs are left behind after you’ve used your electric heater.

We Will Help You Every Step Of The Way

Our commercial bed bug packages are perfect for do it yourselfers, hotel owners, property managers, pest control companies,  dormitories, rental centers, and much, much more. Utilizing heat treatment to destroy bed bugs has been proven to be the best and fastest way to kill bed bugs and their eggs at the source. Our bed bug packages are designed to go to work fast, allowing your turnaround time to be one day or less. Shop Colorado Tri-Flo System’s bed bug heating packages today.

Do I have a problem

Early action leads to a reduction in out of service room costs, pesticide use in treatment and minimizes overall damage caused by pests, eliminating them before large-scale infestations can take hold. Colorado Tri-Flo Systems carries several products that help with this detection. We are a Spotta Authorized Reseller. Spotta’s proactive approach to detection works alongside our Eradi-Flo heaters that can be run on multiple electric systems worldwide.

When you choose to protect your hospitality business with a Tri-Flo electric bed bug heater, you have a way to combat any bed bug or pest infestation the moment it happens. Keep your hotel, motel, bed and breakfast, or other hospitality location free of hazardous chemicals and unwanted pests when you fight those infestations with heat. Get free shipping  when you order from Colorado Tri-Flo Systems.

Once you’ve eradicated a bed bug or pest problem in your home using our electric bed bug heaters, what can you do to ensure they don’t come back? Tri-Flo Prevent with GlowGuard® is an Eco-friendly solution that helps protect your home and business against re-infestation. Just spray the GlowGuard® mixture throughout your space — it’s even safe to use on mattresses, carpet, drapes, and near electric outlets! Combine GlowGuard® with our electric bed bug heaters for pest-free results!

Protect your livelihood and
reputation the easy and effective way. 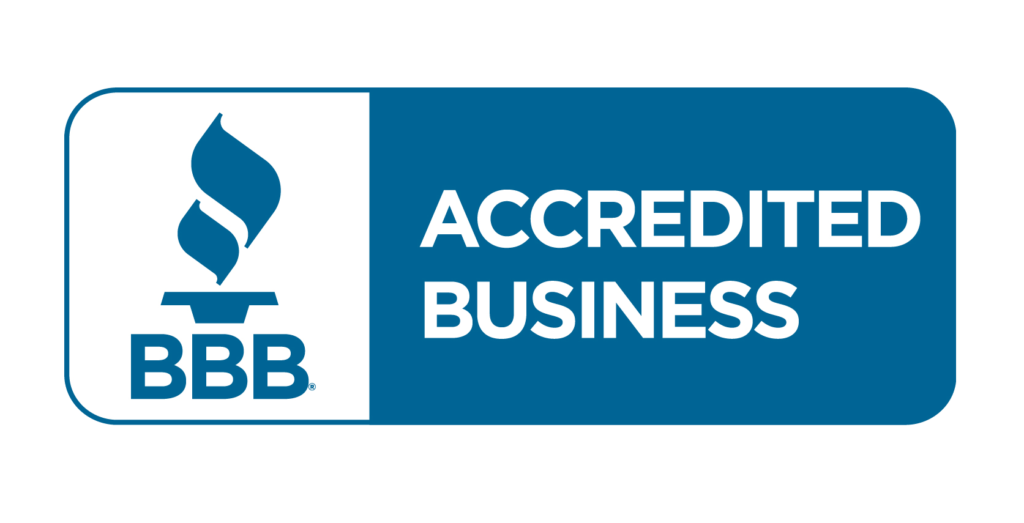 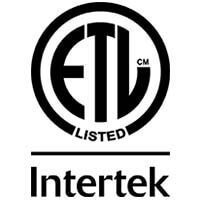 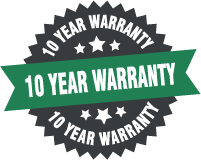 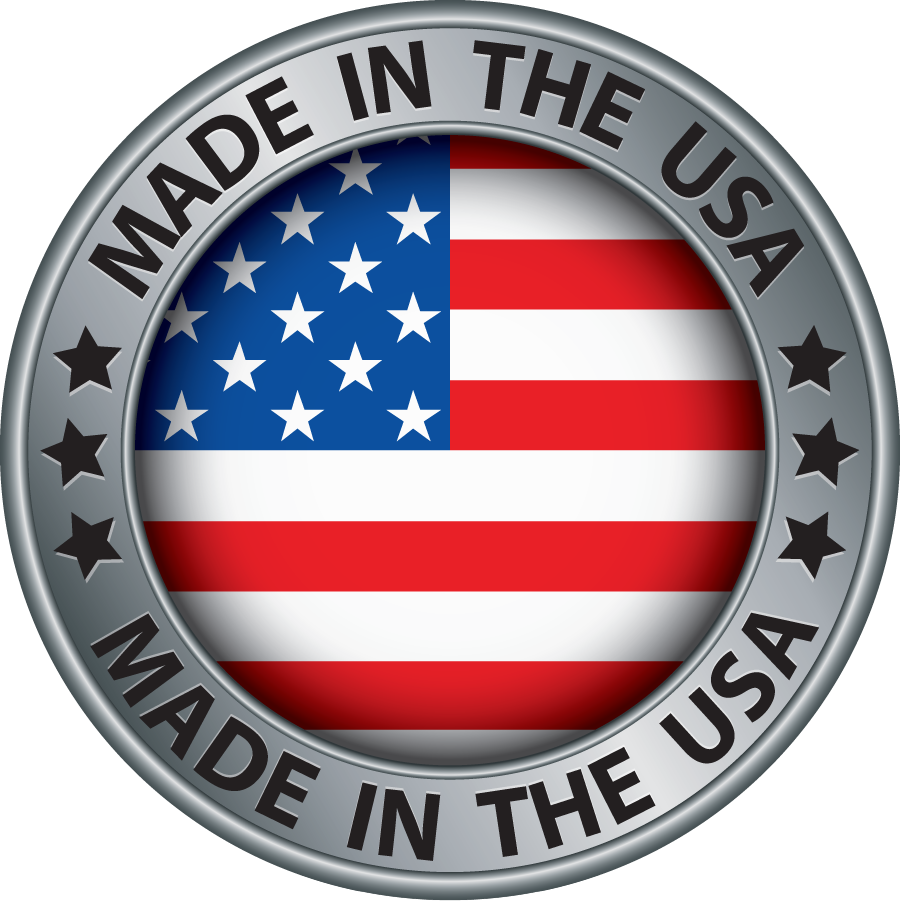